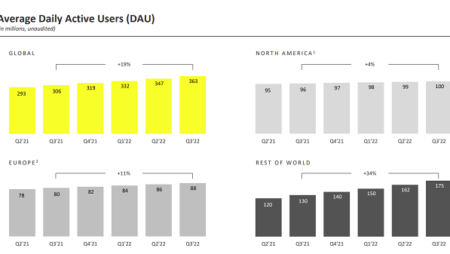 Snapchat has shared its latest performance update, reporting an increase in users, but slower ad growth as a result of ongoing challenges in the digital ads market.

It’s a mixed report – first off, on users: Snapchat added 16 million more daily active users for the quarter, taking it to 363 million DAU.

As you can see in these charts, Snap is still seeing the majority of its growth in the ‘Rest of World’ category, where it’s added 45 million users year-over-year.

The app has seen significant growth in India, where advancing mobile adoption and improving connectivity are helping it expand its reach and presence. Which is a positive for the app’s longer-term potential, but it doesn’t provide a major boost for the app’s revenue right now, at least not in the way that adding users in the US would.

“We grew global time spent across our content platforms by continuing to invest in personalization, driving more subscriptions to creator content, improving content ranking through better understanding of new Snapchatter interests, scaling our Creator and Partner ecosystem, and investing in operations to maximize return on content supply and capacity.” Like all platforms, short-form video has been a winner for Snap, and while Spotlight is pretty much a direct copy of TikTok, the numbers here underline why the platforms do latch onto significant trends like this, as a means to maximize engagement.

It’s not original, no, but it works in keeping users in-app for longer, as opposed to them switching to another platform for the same.

And given that Snap has also seen a continued downturn in engagement with Friend Stories, it needs to find new ways to keep people interacting, and spending time in app, even if content from their direct connections isn’t as big a lure.

Though this is a concerning trend note:

“Total time spent watching content in the United States decreased 5% year-over-year as the diminished depth of engagement with Friend Stories was not fully offset by the growth in viewership and growth in time spent with Discover and Spotlight in the US.”

That’s especially relevant when you look at Snap’s revenue stats:

As you can see here, while Snap brought in $1.13 billion for the quarter – a 6% year-over-year increase – its income is hugely reliant on the US market.

If Snap’s seeing a downturn in US user engagement, that’s a problem, and it’ll be an important element to track in future performance updates.

“Our business continued to face significant headwinds in the third quarter, and we took action to further focus our business on our three strategic priorities: growing our community and deepening their engagement with our products, reaccelerating and diversifying our revenue growth, and investing in augmented reality.”

Hit by impacts as a result of Apple’s ATT update, and the global downturn in digital ad spend, Snap’s revenue growth isn’t at the levels that it, or the market, would hope. But it remains confident in its strategy, which is delivering more active users.

“Advertising revenues follow engagement, so while we are facing near-term headwinds to our revenue growth, we remain optimistic about our long-term opportunity based on the growth of our community and engagement.”

Snap’s also looking to tap into the popularity of Spotlight as another ad driver, with a range of new ad tests.

“We believe that Spotlight offers an exciting new way for brands to experiment with video creative and learn how to make content that inspires the Snapchat community. We are also working on new tools that enable businesses to easily promote their most engaging Spotlight content, drive conversions, and measure their success with Ads Manager.”

That would also, presumably, involve a level of revenue share for Spotlight creators, who currently don’t have a direct monetization pathway, other than Snap’s Spotlight Rewards program.

Snapchat also says that it’s ‘using this period of reduced demand’ to implement upgrades to its ad delivery platform and auction dynamics.

Snapchat’s also shared a new stat on Snapchat+ subscriptions, noting that it now has more than 1.5 million paying S+ subscribers, up from the million it reported back in August. It’s hard to say whether add-on subscription elements will become a sustainable revenue pathway for social apps, but Snapchat+ is providing some relief in offsetting Snap’s ad losses, which is a positive for the platform at this stage.

More recently, Snap has also made engaging older audiences a focus, which has produced some results:

“Daily average time spent for Snapchatters aged 35 and older engaging with Shows and Publisher content increased by more than 40% year-over-year.”

If Snap can get this element right, and keep more older users in the app, as opposed to seeing them drift off from what’s traditionally been a younger platform, that could help it reinforce its growth numbers – and as Snap notes, that, eventually, should see ad revenue increase in-step.

But Snap’s real future may well lie in AR, where it remains the market leader in most respects. Snap’s AR experiences are more refined, more engaging, and more likely to go viral than those in other apps. Whenever a new AR trend comes up – from dancing hotdogs, to aged up effects, to anime characters, to crying face, it’s Snapchat that’s the source, while its advanced AR tools for shopping are also opening up new opportunities for brands across the board.

There are some concerning signs here for Snapchat’s overall usage, and less income leaves less money for investment in its own AR glasses. But Snap’s connection with AR developers, and internal creative nous, leaves it well-positioned to remain a critical platform in the next stage of digital connection, even the metaverse, which will require 3D objects and experiences.

Maybe, then, Snapchat’s future isn’t even the app itself. I mean, it has long called itself a camera company, not a social app.

Overall, it’s difficult to take a lot from Snap’s latest report, because overall market trends are weighing on its results, and its relative growth stats look reasonably solid.

But lower engagement in key markets is a concern, even with more users coming in. I would say that this is the biggest takeaway here, that Snap may be seeing the start of a broader usage shift away from the app.

It’s too early to mark this as a trend, but Snap may need to evolve its business beyond the app to truly maximize its potential.